The teams have been loving following the shores of the Black Sea, so the first 600km or so today was spent doing just that from Georgia into Turkey, as far as another major port – Samsun. This is a linear city and another bustling port – this one extending between the two large river deltas of the Green River and the Red River. Samsun has much ancient history, is mentioned in Homer’s Iliad, and in ancient Roman times gladiator sword fighting took place here. In contrast, football is the most popular sport today!

Another 700 km to Istanbul -  the most populous city in Turkey and the country's economic, cultural and historic centre. Istanbul is a transcontinental city in Eurasia, straddling the Bosporus strait (which separates Europe and Asia) – MCS pupils who went on last year’s Geography Expedition to Iceland stood astride the continents of North America and Europe where the mid-Atlantic Ridge that separates the two is visible in-land. Here Istanbul sits astride the continental plates of Europe and Asia – perhaps there is a theme there for a future school expedition – seeking out the plate boundaries around the world to straddle continents?!

An estimated 12 million tourists visit Istanbul a year (outside lockdown that is – ouch – their economy is going to be hurting), making the city the world's fifth most popular tourist destination in the world. The city's biggest attraction is its historic centre, partially listed as a UNESCO World Heritage Site, Best known is its Blue Mosque so-called because of the beautiful hand-painted blue tiles that adorn the mosque’s interior walls

Another 150km of travel took the teams from Istanbul to the main city in NW Turkey of Bursa, managing to keep to the low land for faster travel. As the teams sped past they were mesmerised by the beauty of the 14th-century Great Mosque, and glad not to have to scale the 2,500m-high Mount Uludağ that is the backdrop to the city.

350km later they reached Izmir, a city on Turkey’s Aegean coast (founded by the Greeks, taken over by the Romans and rebuilt by Alexander the Great before becoming part of the Ottoman Empire in the 15th century). And then a further 250km on heading South to Maramaris on the Mediterranean – where once small sleepy fishing villages have been taken over as the well-know package holiday destination to British Tourists (amongst other) today. This stretch of coastline is the Turkish Riviera (also known as the Turquoise Coast) with busy pebbly beaches and long seafront promenades, and lively nightlife. It sits in a valley between pine-forested Taurus Mountains (the peaks of which are above 500–3000 metres) and the clear waters of the Mediterranean.

Knowing there are many thousands of miles still left to travel to reach Bulawayo, the teams left behind the temptations of a heavy night in the nightclubs of Marmaris, and headed through the tracks in pine-clad scrubby Mediterranean slopes of the Antalya countryside, up into the Taurus, through sleepy villages of Burdur, Dagbeli, Bilginler, and eventually to Bucakkoy. Here they bedded down for the night, listening to nothing but the bleating of mountain goats, intoxicated with a heady aroma of pine, wriggling to avoid the prickly pine needles entering the sleeping bags, and lulled to sleep by the warm breeze whistling through the trees. 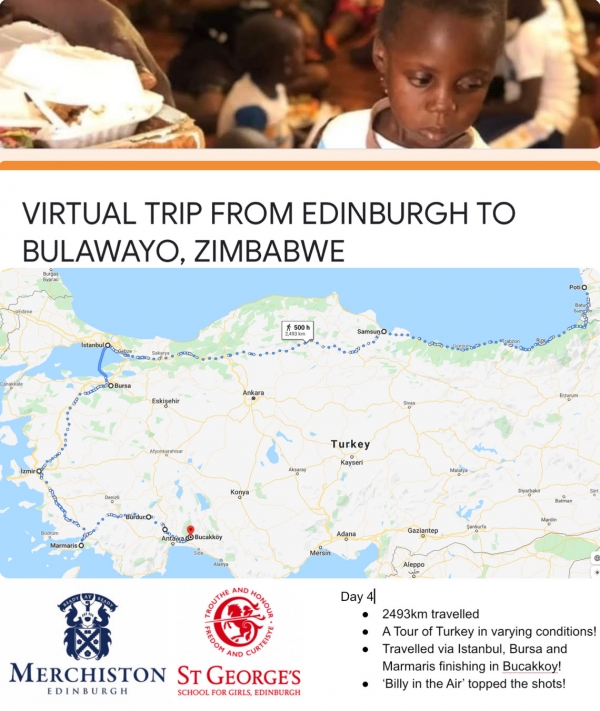