Wow! – Another epic day of over 2000km. Waking from their Taurus Mountains camp just outside the village of Bucakkoy, Atalya, Turkey, the team has set off again, this time intent on leaving Turkey and finding their way overland, travelling East around the Mediterranean Sea, and on South then West, onto the African continent at last.

This Mediterranean Sea is quite a place – Brits (and others) traditionally love a beach holiday somewhere along its 46,000 km of coast in many of its hundreds of thousands of resorts across the 24 countries that either border it, or are within it (i.e. islands!). It is almost entirely enclosed by land except for a narrow strait just 14km wide that connects the sea to the Atlantic Ocean (at the Strait of Gibraltar). On the other side the Black Sea connects with the Mediterranean via the Strait of Bosporus which we have already travelled past (at Istanbul).

And as we increasingly hear in the news over about the last decade, people fleeing persecution or the ravages of war, or those simply in the hope of a better life (better education, better jobs, better freedom, better respect of their human rights, etc.), try to cross the Mediterranean by boat in the hope of reaching the more democratic countries of Europe in which to realise their dreams.

The team have continued their way round the Mediterranean coast, still within Turkey, for some further 750km today – the further East they got, the more signs there were of the 3.6million refugees (and those are just the official registered ones) that have fled into Turkey fleeing the Civil War in neighbouring Syria.

The teams dashed the 100km of so through the very Eastern side Syria, along its coastline with the Mediterranean, breathing a big sigh of relief when they reached Lebanon the other side.

Throughout Lebanon they were intoxicated, first with the aroma of many Olive Groves in the Shouf Mountains to the North, and then the heady and uplifting aroma from the many Lemon Groves as they headed South. Lebanon's location at the crossroads of the Mediterranean Basin and the Arabian hinterland has contributed to its rich history and shaped a cultural identity of religious and ethnic diversity, and mazing cuisine. Such a shame to travel so fast through it, but needs must, Bulawayo is the quest. Being so famous for rich and amazing cuisine – a heavy late lunch, eaten in a rural village just south of Beirut, the capital city, around long trestle tables under the shade of the trees in a lemon grove, could not be resisted!

It is some 250km travel from Beirut, to Jerusalem, and then a further 300km or so from Jerusalem to Eilat, Israel, prior to entering Egypt, which involves crossing a complicated mosaic of Palestinian and Israeli territories, in yet another breathtakingly beautiful and historic part of the world.

The city of Jerusalem is located on a plateau in the Judaean Mountains between the Mediterranean and the Dead Sea. It is one of the oldest cities in the world, and is considered holy to the three major Abrahamic religions—Judaism, Christianity, and Islam. Both Israel and the Palestinian Authority claim Jerusalem as their capital, as Israel maintains its primary governmental institutions there and the State of Palestine ultimately foresees it as its seat of power. Sadly, of course, there is much dispute and conflict as a result. Look just how incredible the city looks as the team huffed and puffed their way past.

Finally on into Egypt, via the well-known holiday destination of Sharm El-Shekh on the Red Sea, following yet another beautiful coastline (now that of the Red Sea), down and up its two main ‘fingers’, via El Tor, and reaching Ras Abu Rudels, El Tor, S Sinai, Egypt to bed down for another night. A quick snorkel in the Red Sea was enjoyed by all, prior to setting out sleeping bags, this time on a warm sandy beach. The aromas of the lemon and olive groves, the devastation of human lives in Syria, the turmoil of the breathtakingly amazing Jerusalem, phasing into one in their minds as everyone falls fast asleep! … 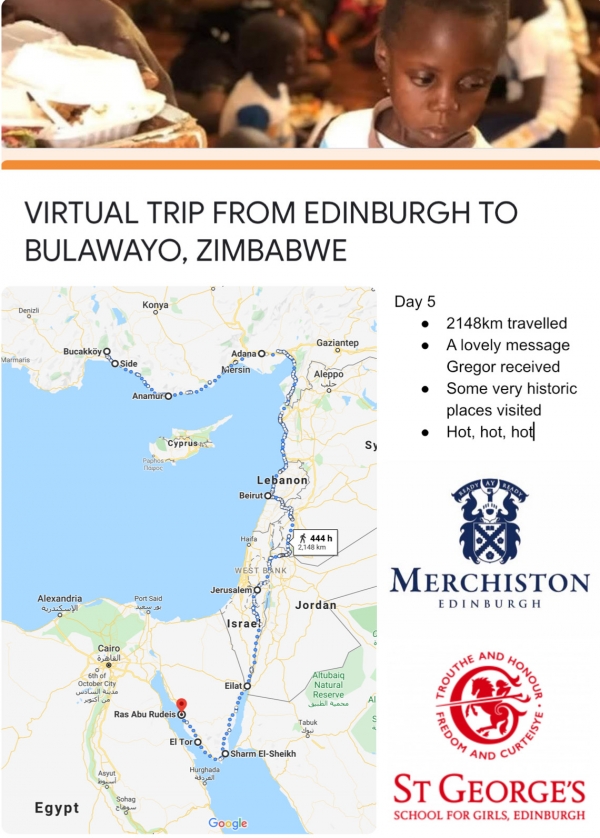