Waking up in Ben Gardanes, Tunisia, known for its particularly large collection of dromedaries, the team were delighted to be greeted by this local Bedouin who had heard of the large gathering of teams on their Bulawayo quest, offering an alternative means of transport through the desert regions to those with weary legs. Much bartering was done by you all, and those who were happy with their price, had an easier journey for part of today’s epic 5126km travelled!

Algeria is a country in the Maghreb Region (Western region) of North Africa. The capital and main city is Algiers ( some 1000km along Algeria’s Mediterranean coast from where the teams stayed last night). With an area of 2,381,741km2 (mostly desert but packed with oil – so a very prosperous nation for those who have access to the oil wealth), it is the largest country in Africa and in the Mediterranean Basin (and the 10th largest country in the world). It has many bordering countries: to the northeast is Tunisia, to the east is Libya, to the southeast is Niger, to the southwest by Mali, Mauritania, and the Western Saharan territory, to the west by Morocco, and to the north by the Mediterranean Sea. Perhaps not surprisingly then, in order to protect its oil wealth, Algeria has one of the largest militaries in Africa, and the government spends more than any other African country on its military (with considerable poverty amongst Algeria’s inhabitants that don’t have access to any of the oil wealth, those in the country would rather more of the Government’s money (its GDP) were spent on other services, such as education, health care, small business enterprise, supporting diversity and human rights, etc., as well….. ho hum……..).

The country is all desert or semi-desert, with most of the population living in the fertile north, and the Sahara Desert dominates the geography of the south. This arid / semi-arid climate and landscape makes the country very vulnerable to climate change in the form of Desertification (- the making of arid desert due to miss-use of semi-arid land by human activities - about which all IVth Formers are experts, after their learning all about climate change in their IVth Form Geography this year). Our A Level Geographers know all about the ‘power’ gained by nations through belonging to ‘alliances’ – such as Britain to the EU for example ……!!!.... another ho hum….!). It is a member of the African Union, the Arab League, OPEC, the United Nations, and the Arab Maghreb Union, of which it is a founding member – As our A Level Geographers learn, belonging to alliances of this sort is one means by which countries can gain significant world power and influence over others, compared with having only their own two feet to stand on……

Morocco: The teams had a refreshingly different landscape in Morocco – a small nation, also in the Maghreb, to the West of Algeria, a large part of which is mountainous: the teams 1st traversed the Rif Mountains to the north, and then the more famous Atlas Mountains (peak elevation is 4167m (13,671ft) in the centre and the south of the country). It is these mountains that are the physical geographical barrier separating the Mediterranean sea (that the teams have travelled along the shores of for so many 1000 km), and the Atlantic Ocean (that the Mediterranean spills into in the West). The northern most point of Morocco is only some 500km across the sea from the UK’s Strait of Gibraltar – the nearest point between Europe and Africa.  The Moroccan mountains are famously inhabited by many a friendly Berber Tribe who waived the teams on their way.

The teams would love to have bedded down in a Berber Village, and enjoyed the hospitality that the Berber people are well known for, but with Bulawayo being the quest, having enjoyed the coolness of the Mountains for many a thousand miles trekking, they headed back into Algeria into its interior, reaching as far as Reggane. This is a small oasis in the middle of the Sahara, also known (when Algeria was still a French Colony and the 1954 to 1962 War for Independence was still in full swing) as being where France started its nuclear testing programmes. I do hope our teams have their Geiger Counters with them tonight. 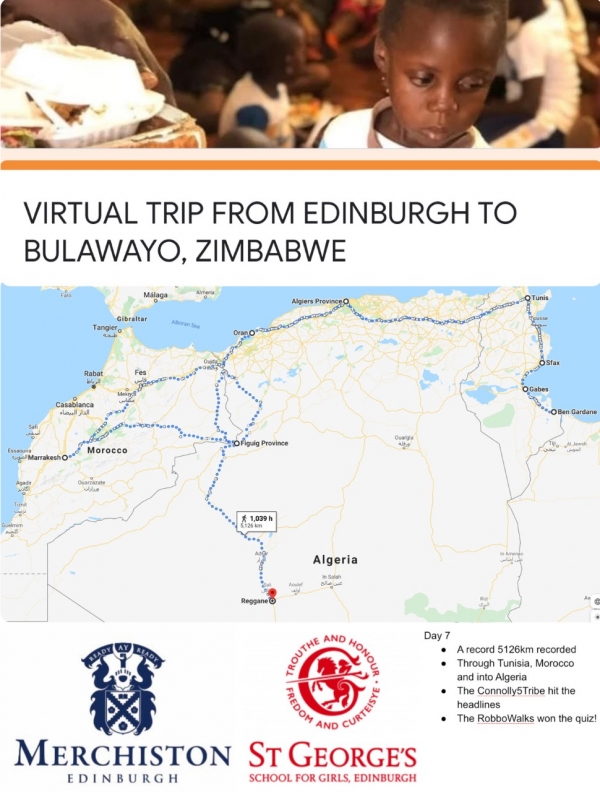