Egypt to Tunisia via Libya

… And another plate boundary crossed (our 3rd of the trip) – this one between Asia and Africa, at the site of the Suez Canal.

The teams were sad to say goodbye to the warm balmy breezes of the Red Sea today, and the wonderfully colourful reef fish of their snorkelling last night. An epic journey of some 2700km lies ahead. So much Geography I could mention….. what do I chose?!

Following the coast of the Red Sea, one of the most amazing features the teams crossed to reach Cairo was the Suez Canal. This was hand dug over ten years (1859-1869). The impact this had on world trade and the ability of Britain to reach / maintain its superpower status of the time (the status held by the USA today), cannot be underestimated. This canal is a 193km long hand-dug ditch joining the red sea with the Mediterranean. It is large enough to be traversed by large cargo ships, and cut the journey time by ship (the only means of travel for cargo at the time) between Britain the many of its colonies by some 44 days (avoiding ships having to travel the long hazardous journey from the Indian Ocean, around the treacherous Cape of Good Hope to the South Atlantic, up through the North Atlantic, to reach the mother land of Britain).

Cairo – where does one start!... is the capital of Egypt, and with its metropolitan area of a population of over 30 million, is the largest in Africa, the Arab world, and the Middle East, and the 6th-largest in the world! The following two photos, in my view, sum up everyone’s experience who has been lucky enough to have the amazing experience of visiting there:

I don’t get to know the route the teams took until after 8pm at the end of each day when Mr Charman forwards the route having collated the mileage from the teams. My late father was a Desert Rat in the Eighth Army in WWII, active throughout North Africa including in the campaigns of Tobruk, (17 November 1941)  and Tripoli (23 January 1943), which probably involved him travelling the whole of today’s route but in the opposite direction, and at considerably slower speed!

I remember his stories recounted to me in my childhood of his thoughts whilst whiling away the hours lying flat on desert surfaces, day after day and night after night, waiting for orders /action, being entertained by the antics of many dung beetles scurrying past, rolling balls of dung. I am sure all teams today passed many (in fact with the mileage in the desert covered today I would estimate many million), but may well have been too focused on reaching Bulawayo to notice!

Any of you who go on to read Geography at University will undoubtedly learn somewhere in your first year foundation studies about Ralph Bagnold, who wrote the definitive Geography of Windblown Sands establishing the discipline of Aeolian geomorphology. He served in the same Western Desert Campaign (1940–1943) of the Second World War as my Dad, but spent his days watching the wind-blown sands at close quarters rather than the dung beetles!

Travelling West along the coast, from Egypt, all the way through Libya (some 1000km from East to West), and into Tunisia, one is of course traversing the northern fringe of the Sahara Desert, where it meets the Mediterranean Sea. The Sahara is the largest hot desert in the world, with an area of 9,200,000 km2. For al your 4th Formers who have been studying climate change this year, you will understand (and can explain to your brothers / siters / parents / grandparents….) how, for several hundred thousand years, the Sahara has alternated between desert and savanna grassland in a 20,000 year cycle caused by the precession of the Earth's axis as it rotates around the Sun, which changes the location of the North African Monsoon. The area is next expected to become green in about 15,000 years.

At last Ben Gardane, Tuniasia, was reached just 32km from the Tunisian-Libyan border, and the resting point for the teams tonight. It is best known both in Tunisia and Libya as a trade road and an open exchange market. It is distinguished for its large population of dromedaries (the one-humped Camel) estimated at 15,000 head. – Beware teams, Camels are well known for their halitosis! 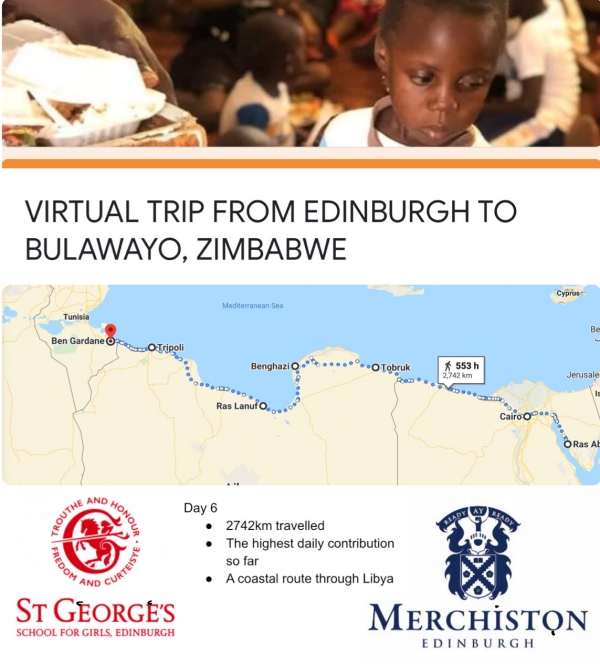