On waking in Reggane, Algeria, a quick get up and go was done by all before the Geiger Counters started clicking (see previous day’s Geography notes to check why!). Again camels were the chosen preferred mode of transport as nothing but hundreds of km of the Sahara desert lies ahead, at least as far as Mopti in Mali.

Mali, a landlocked country in West Africa, was once part of three West African empires that controlled trans-Saharan trade (the Ghana Empire, the Mali Empire, and the Songhai Empire) that brought all three great wealth and knowledge. During its golden age (at its peak in 1300), there was a flourishing of mathematics, astronomy, literature, and art. In the late 19th century, During the ‘Scramble for Africa’ (i.e. colonialism of the late 19th century) , France seized control of Mali, making it a part of French Sudan, and there has been a complicated history of strife, conflict and struggle, both as a nation, and individuals in this land-locked nation, ever since.

Nowadays it is a poor nation in term of formal wealth – ( 163rd of the 186 countries in the world). By far the majority of the population live by subsistence – meaning they make enough to feed and look after themselves only. They will not be in formal employment of any sort, which means the government obtains no revenue in the form of income tax from them, to pay for such services for its people such as education, health care, improved transport, etc. This situation is typical amongst the majority of the population in many poorer nations in the world, which sadly are mostly in Africa. It is a vicious cycle. Many would argue that without good education and health care provision it is difficult for a nation to develop its way to improved living standards and begin to progress through economic development (for the A Level Geographers amongst you – think Rostov’s Model here, compared with Frank’s Dependency Theory, compared with World System’s Theory, and the Development Cable Model, etc!!).

Mali has a Young Dependent Population: 67% of it is under the age of 25 in 2017 (compared with some 23% in the UK). The government struggles to provide education, health care, etc., for its people. As a result, Life Expectancy is only age 58yrs, compared with the UK’s 85yrs.

The further south you go in Mali, the higher the rainfall, and the higher the certainty of rainfall, such that the southern half of Mali has the Niger and Senegal rivers flowing through it, providing water for irrigating crops, upon which the food security of the nation is reliant. The rivers also open up mining opportunities, mostly of Gold . Mali is Africa’s third-largest gold producer after South Africa and Ghana. This is in part due to the efforts of artisanal miners (- subsistence miners not officially employed by a mining company, but work independently panning for gold using their own resources). – and so yet again the government is losing out on much potential revenue from this. I am sure our teams were tempted to join in the gold panning of the artisanal miners as they passed.

Unfortunately gold mining like this is plagued by fatal accidents, smuggling, child labour and environmental damage. The government of Mali announced plans in 2014 to try to improve this situation, but with such limited resources, and conflict between factions involved, progress has been slow. Just as well our teams prioritised instead speeding on their way towards Bulawayo.

Bobo-Dioulasso in Burkina-Faso was reached. Burkina-Faso is blessed with much more rain – the teams are beginning to reach hot-steamy Africa now. But again is plagued by poverty and conflict for reasons similar to those mentioned for Mali above. Bobo-Dioulasso is a city of only half a million people, and has a long complex history spanning many centuries. Today it is a centre for business. The teams bedded down in the shade of the beautiful old buildings of the railway station, not far from the city’s bustling market square. 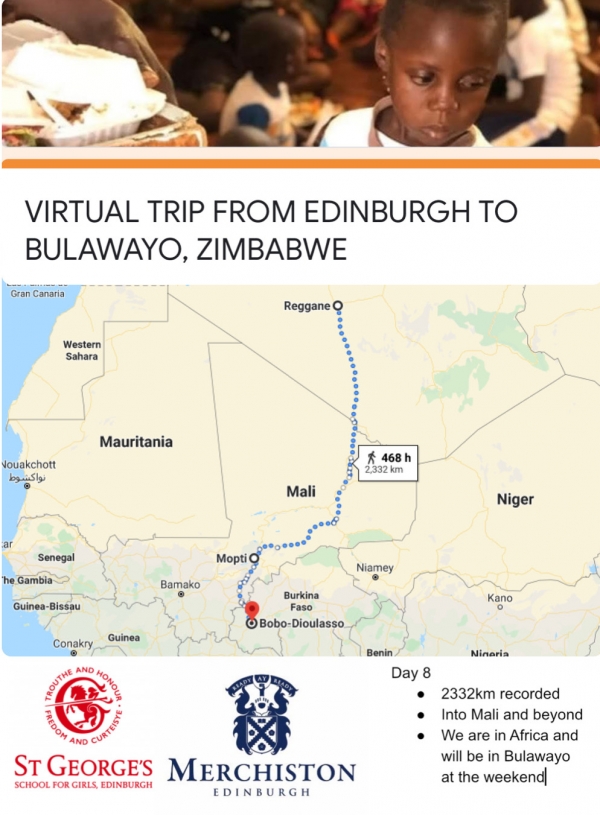