Table showing some Indicators of Development for the countries travelled through over the last 4 days:

(Z&X – for the UK and Scotland comparable adult literacy figures are not available, only these ‘functional literacy’ figures)
Z = 16.4% (i.e. 1 in 6) in the UK have poor functional
X = 26.7% (i.e. 1 in 4)in Scotland have poor functional literacy
Life Expectancy = average age someone can expect to live to
Adult Literacy = % of the total population over the age of 15yrs that can read and write
Number of Doctors per 1000 people = self-explanatory!
GDP per capita = total value of all the goods and services produced in the country divided by the population
i.e. could be viewed as an indicator of the money the government has to provide for its people, such as in education, health care, transport infrastructure, and anything else the government wants to spend its money on (such as military…..).

If you hadn’t noticed already, Geography nowadays is a very broad subject -quite different from my school days of a black and white print hard back text with some 10 black and white photos in it, one showing a pineapple growing somewhere in South America!

On a more cheerful note – today the teams travelled from, and through, the top two chocolate nations of the world – Cote d’Ivoire and Ghana!... Well to be more precise, the world’s top 2 producers of Cocoa Beans. Complicated Terms of Trade (which our A Level Geographers are experts on) mean that they can’t actually produce the chocolate in these countries, which would give them considerable ‘value added’ [i.e. much more profit made from a chocolate bar manufacturer in terms of what they can sell a chocolate bar for compared with how much it cost them to make the chocolate bar; compared with how much ‘profit’ a farmer can make from selling a sack of cocoa beans compared with how much it cost them in terms of labour and inputs to produce it]. A Level Geographer’s amongst us will immediately be shouting out… A G Frank’s

So you can see from the table at the start of this sheet that neither Ghanaians nor Ghana, or Ivorian’s nor Cote d’Ivoire, are wealthy from so kindly producing all the cocoa beans that western manufacturers turn into the delicious chocolate that we are so addicted to and prepared to pay so much for, making the western manufacturers (and their shareholders) so wealthy as a result!
Time for another ho hum...

Propelled by unlimited chocolate, the teams sped across the forested slopes and wide lazy rivers of Cote d’Ivoire, Ghana, and Togo, to reach Port Harcourt in Nigeria. Formerly (as far back as 1912) a fishing settlement in the Niger Delta, but then in 1956 crude oil was discovered nearby, and Port Harcourt's economy turned to petroleum when the first shipment of Nigerian crude oil was exported through the city in 1958. One of the main Oil companies in the region is Shell, which has received considerable criticism for insufficient care of the environment (which has resulted in local conflict, including the murder of the famous local poet (in fact Nigerian writer, television producer, environmental activist, and winner of the Right Livelihood Award for "exemplary courage in striving non-violently for civil, economic and environmental rights") Ken Saro-Wiwa in 1995,
and little trickle-down of oil revenue to many in the population, as evidenced by indicators of development in the table above.

Again it will be a hot night for the teams bedded down in the mosquito-infested delta of the Niger River. They will undoubtedly sleep well, however, counting cocoa pods falling from trees throughout today’s journey! 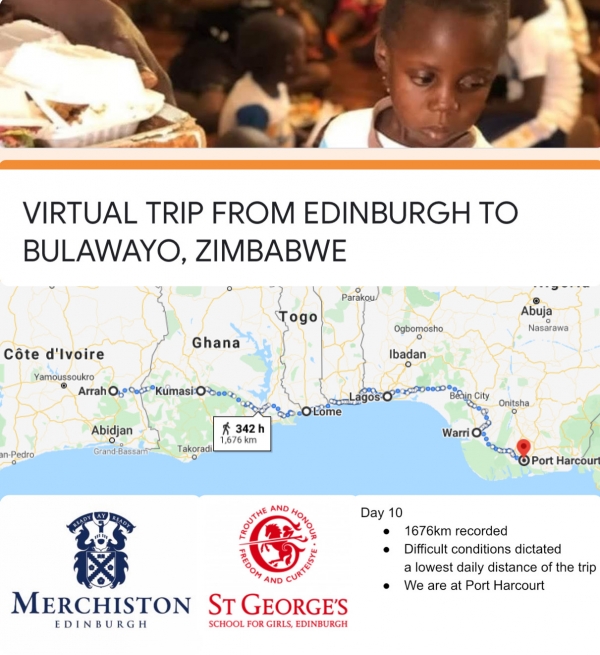