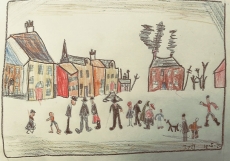 Over the summer term, the Primary 3 girls were set a four-week project by our Art department on L.S. Lowry to tie in with our topic on Victorians.

The four tasks they were set were:

Here are some facts that the girls found out:

Laurence Stephen Lowry was born in 1887 and lived during the Victorian times. He used 5 colours to make his paintings: ivory black, Prussian blue, vermilion, yellow ochre and flake white.

Lowry became famous for painting scenes of life in the industrial districts of North West England. He developed a distinctive style of painting and is best known for his urban landscapes filled with human figures often referred to as matchstick men.