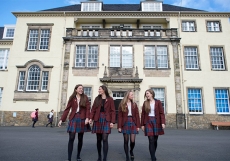 Monday
Today’s Taskmaster challenge was to put on an item of clothing in the most unusual way. Again Hannah amazed us by putting on her leavers' hoodie whilst hanging upside down!

Then came the virtual Bake Off. The task? To make scones. Having collected the requisite ingredients, we were given our recipe and frantically started to bake. Some chose to modify the recipe, adding fruit, but most stayed true and made plain scones. A few minor mistakes were made, but this added to our entertainment and enjoyment as we chatted whilst baking. In the end everyone was pleased with their creations! It was a stressful and intense morning as we all tried to coordinate our cooking, but it was great fun and gave us a taste of what the real bake off might be like in case we ever decide to enter!

In the afternoon Jane Turton, CEO of All3 media, spoke to us about interview skills and preparation for work especially in the media industry, she was joined by a former student, Charlie Cooper, who is going into her third year at university and she told us about the importance of work experience and her experience as a runner on a TV programme.

The afternoon's activity was colouring in with Mrs Mushat. This was very relaxing and we all had a good chat.

Tuesday
We started off the day with ‘Karaoke in the Kitchen’ with Mrs Hall and Mrs Nicol. We all suggested songs to sing and got the lyrics and music from YouTube which we shared on screen. It was hilarious because everyone was out of time because of time lags on the computers so we all sounded dreadful as we tried to sing together!

In the afternoon we enjoyed playing virtual card games, although this was something no one had done before and it was just as much fun as playing cards face-to-face.

The Taskmaster Challenge for Tuesday was to make the best 'face meal'. Hannah again pulled through by making a face with her pancake and toppings!

Wednesday
The Scavenger Hunt was the main activity of today, with teams working out a list of clues to find in the house. We then had to post pictures of our strange collection of items from clocks to compasses on the Teams feed so Mrs Bryce could check our items and give us our time! We are a very competitive bunch.

In the afternoon final preparations for the online revue were being made. Most scenes had been filmed earlier in the week, but Saff still had the great task of editing all the scenes together to make the final product.

The Taskmaster Challenge was to make a really big version of something, Hannah created a massive pencil to try to write with!

Thursday
Today’s Taskmaster Challenge was to reenact a scene from history in 20 seconds. Hannah creatively re-enacted the story of George and the Dragon using a homemade sword and soft toy dragon to slay.

Later in the morning some of the girls enjoyed discussing their favourite books with Mrs Hems over a virtual brunch. Everyone really enjoyed sharing their books and well as getting ideas for their summer reading.

Friday
Car maintenance with Mr Rodger was really useful for those of us who have already passed our driving tests and the learners amongst us. We found out how to check tyre pressure as well how to look after the paintwork on your car.

The Taskmaster Challenge was to demonstrate the best method of transport in your home, with some of the results including a cardboard carriage drawn by a small rocking horse!

During the weekend there were two taskmaster challenges to complete: Saturday's was to reveal something surprising under a sheet and Sunday’s was to turn yourself into a superhero and reveal your superpower. Hannah proved herself to be the Queen of Taskmaster as she completed every challenge and we were especially impressed with her high jumping superpower on Sunday!

During Form Time on Friday we finally got to watch the Revue, which is a highlight of the year for us. Saff did an amazing job editing all our little clips together and we hope the teachers found it as entertaining as we did as we impersonated them in our own kind and affectionate way.

We are very grateful for all the effort the teachers have put in to make our virtual Leavers' Fortnight so memorable.