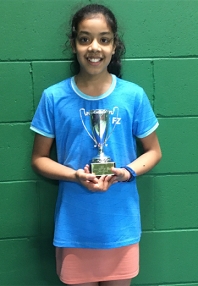 Well done to Deepti (Remove), who recently received news that she has been successful in her application to become part of the Edinburgh Talented Athlete Support Scheme, which aims to support top-class local athletes in their training and development. Deepti has also been offered a sponsorship with Yonex.

Deepti has had another highly successful Badminton season, winning the Edinburgh SSBU Primary Championships and captaining the Lothian team to victory at the U14 Annual Anglo-Scottish Badminton Team Tournament in Yorkshire, along with many other tournament successes. Deepti finished the season ranked number one in Scotland for her age group and is also reigning national champion at both U11 and U13 levels. Congratulations Deepti on a fantastic season!