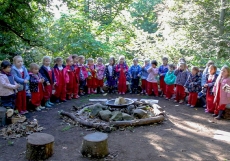 The children in nursery have been enjoying music lessons with Mrs. Morrison, Junior School music teacher, outdoors since the beginning of term. Every week, Mrs. Morrison has met us in the Fantastical Forest with her guitar and we sing songs with her around our nursery campfire. It is every bit as magical and uplifting as it sounds!

Mrs. Morrison has been rehearsing lots of songs with an autumnal theme. Our favourites have included Big Red Combine Harvester, I’m a Furry, Furry Squirrel and Picking Up Conkers. The children have really enjoyed discovering the clues that natures provides to show us the seasons are changing through the learning that accompanies these songs.

In normal times we would showcase the children’s learning in a much-loved Autumn Concert for our nursery parents and grandparents. This was not possible to achieve this year due to the necessary ongoing Scottish Government measures placed on social interactions and group performances. 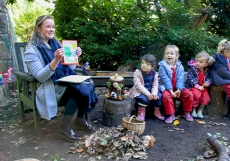 Not wanting anyone to miss out, Mrs. Morrison and the nursery team arranged for the concert to be pre-recorded by ‘Mr. Iain’ from our IT department. We met outdoors in the Fantastical Forest, set our stage and Mrs. Nettleton read the children an autumn story to accompany their musical performances. We even brought some of our nursery teddy bears and toy animals along to create an audience in the absence of our families!

The video of our concert will be shared with our nursery families and we hope that they have as much enjoyment watching it as we had when we were recording. Well done to the children, IT department and the nursery team for making such a special memory for our families.