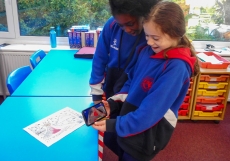 First, we coloured in a picture of a volcano. Then we used an app called Quiver Vision on our phones. We put the phone over the picture so the whole picture could be seen on the screen. Then the volcano picture suddenly came alive! 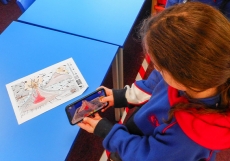 It was in 3D and it started to explode. We could see smoke coming out of it - it even made a noise. We could even see the inside of the volcano. It was really cool... or perhaps we should say really hot!