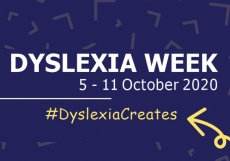 Students and staff viewed a short, animated film released by the British Dyslexia Association this week. The video was shown to classes in Lower and Upper School as part of the national raising awareness of dyslexia week 5-11 October.

Contributing to this week is part of the inclusive and supportive ethos of our school. The film which celebrates diversity of thinking was watched in assembly in Lower School and during registration in Upper School.

Mrs Sonia Edwards, Deputy Head said, “It is always good to support and celebrate every individual in our community. The national dyslexia awareness week is a good reminder that there are hidden difficulties that impact upon individuals and about which there needs to be awareness. We will look to present ways in which we can understand and support other hidden difficulties later in the year.”

The British Dyslexia Association encourages us all to look at the power of dyslexia to create ideas, organisations and society and the invaluable contributions those with dyslexia make to the UK.

They also recognise that dyslexia also creates challenges and barriers so this week is designed to raise awareness of these and celebrate best practice in supporting and empowering individuals to achieve their potential.