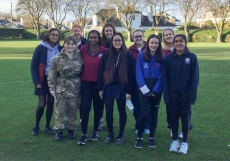 On Saturday 21st November, twelve sixth form students from the school space design team competed in the digital heats for a place in the national final. They were led by Amelia, club president, and Sophie, club vice-president.

Our girls formed a company called Kepler Automation with Eltham College and Royal Grammar School High Wycombe. The challenge was to design a space settlement on Mercury, to allow for mining, refinement, and shipping of materials. The company then bid for the contract to build the settlement and refinery, by presenting their concept to a team of judges and answering questions on the proposal.

Our girls split into sub-teams and worked with their peers from other schools in the areas of structural design, automation, human factors, and operations, with each of our girls presenting on their area of specialty. The girls displayed excellent teamwork and communication skills, as well as specialist knowledge. The event was run virtually over Teams, allowing our students to collaborate and compete with students from all over the country.

Kepler Automation was judged to have the best proposal, and the team from St George's will now progress to the national finals for the second year running. Huge credit to the girls, who worked tirelessly over a 12-hour day and produced an outstanding presentation to win on the day!