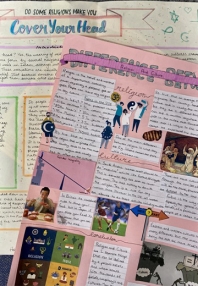 The RMPS department led a fortnight of activities to promote Interfaith Week. The focus was on asking questions and listening to the answers.

As well as an assembly, there was an opportunity for girls to submit questions they had about religion and or God. Questions that girls considered included: "What's the difference between religion and culture?", "What is extremism and what does it have to do with religion?" and "Do world religions have anything in common?" Numerous classes entered the school-wide quiz and Mr. Wright’s class L6Z were crowned the winners. Girls from various faith traditions are in the process of filming answers to some of the questions submitted by their peers and will be shown in due course.

A spotlight on Talking Pictures

In the same week, Sixth Form students met to discuss Blackkklansman. Every half term the club meets to discuss a film that raises interesting religious, philosophical, or ethical questions. Other titles discussed so far include Unorthodox, Broken, and the Two Popes.