Our topic in P4 this term is World War II and we have been learning about evacuees and why children were evacuated during the war. Children had to leave their homes in the city because bombs were being dropped during the blitz and it was very frightening. It was safer for children to be sent to the countryside and the government made posters telling mothers to send their children away. It is a really fascinating topic, especially when we made homemade gas mask boxes and evacuee labels. This was really fun to do. The evacuees had to wear name tags. The labels had their name, date of birth, which school they went to and their address. There were so many children leaving at the same time, it would have been easy to get lost! 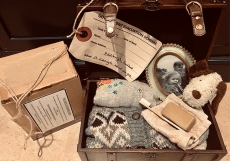 Can you imagine how you would feel going to live with strangers! Evacuees also had to carry a gas mask to stop them breathing in poisonous gases when the German fighters dropped their bombs. We dressed up as evacuees and packed suitcases with things that they would probably take with them, like clothes, soap and a teddy bear. We had to learn a Scottish poem about an evacuee leaving their ‘street an’ freens’ and we all made videos of us saying the poem.

We also made our own propaganda posters like the ones that the government made telling people to evacuate their children for their safety or to always carry their gas mask. We are also watching the 'Spywatch' TV series which is very fun and is about some children who got evacuated and find out they might be surrounded by lots of spies!

There are lots of interesting books about WW2. 'Goodnight Mr Tom' is all about a boy being sent to the countryside. If you like Jacqueline Wilson books, 'Wave Me Goodbye' is good to read.  Remember you can borrow the books from BorrowBox!

Our topic is great. We would be very scared if we were in World War II and it sounds as though all of the people were very, very brave.