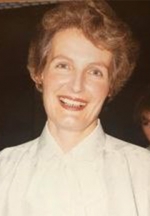 When Joan Clanchy became Headmistress of St George’s in 1976, she was undoubtedly the right person in the right place at the right time. At 36, she was young to be a Head in these days, so it was a bold choice by the Council. It was fully justified. Nigel Shepley (former staff and school historian) writes that ‘if asked to draw an identikit picture of our early, pioneering headmistresses, it would surely closely resemble Joan Clanchy’. Joan, too, passionately believed in a ‘broad, liberal academic education for girls’, based on non-competitive examinations and care for the individual. Joan had the determination, the ability and charismatic personality to put these ideas into practice. In the words of Anne Williams (former staff and parent) ‘Joan was inspirational and approachable, with great dignity and also a sense of fun’.

A hundred years on, principles remained the same; methodology must change. By 1976, girls’ independent schools faced very serious challenges: financial viability, wider career choices for women and demands for co-education. Joan met all these problems head on and was never afraid to take initially unpopular decisions. Helen Mackie (former Head) writes that ‘Joan was a hugely modernising influence and brought the school up to date’. 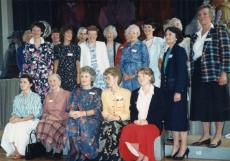 The decision to amalgamate with Lansdowne House School had already been taken but Joan faced a testing time in putting the plan into action. There was very real pain and anxiety for pupils, staff and parents. Joan passed through the crisis with ‘serenity, confidence and humour’ (Women of Independent Mind). Most pupils and some members of staff joined St George’s. A traumatic time for both schools as they gradually settled in, guided by Joan’s sensitivity and understanding. Susan Newton (Lansdowne House) remembers her apprehension when sitting in a St George’s classroom for the first time. Then ‘a tall, smiley lady came in and said reassuringly “I’m a new girl too”’. Old girl Sally Whittle nee Williams (class of 1986) recalls that ‘Joan could look quite daunting but she had a ready smile, twinkly eyes and, above all, she was kind and took trouble with people’. Thus was created the Middle School with its own classrooms, offices and boarding facilities. Since then it has flourished and developed, retaining its own identity to the benefit of the whole school.

Joan was an organiser and enabler, giving full support to staff and girls so that together they could achieve their ambitions. Laboratories were refurbished, modern technology introduced to the classrooms, new courses started including Home Economics, Typing and early Computing. The splendid Art Block was opened, offering an imaginative expansion of all creative arts. Drama productions were more lavish and exciting. From a small string group, a full orchestra was founded and also the popular Concert Band. Both enjoyed tours at home and abroad. Linda Emslie (former staff) remembers a special visit to Germantown Friends School in Philadelphia, when Joan and Michael Clanchy flew out to the USA to support the Orchestra. 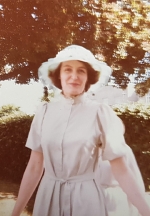 Breaking tradition, in 1979 Joan chose two men to join her staff! Nigel Shepley (History) and John Hall (Chemistry). More distinguished appointments followed and soon this became the valued ‘norm’. Helen Mackie was the first member of staff to be granted maternity leave. She said this ‘caused some raised eyebrows’ at the time, but soon became accepted practice. Liz Childs (former staff) was the first person to enjoy a teacher exchange with another school. This was soon popular and beneficial.

Joan was the opposite of remote. She taught some History, RE and Current Affairs. She took Assemblies in all parts of the school every week and had a special place and time for visits to the Boarding Houses. Michael and Joan joined the formal School Balls when St George’s played host and guest with several boys’ schools. Another first.

Before leaving St George’s, Joan toured all the classrooms. Anne Williams remembers the amazed comments from her groups: ‘She knew all our names!’. Not just first names. Joan knew and valued every girl.

In 1976, St George’s stood at a crossroads. Either it might diminish and be ‘swallowed up’, or it could revitalise and grow. That the latter path was followed is largely due to Joan Clanchy. St George’s owes her a real debt of gratitude.

Tribute in The Times