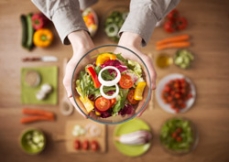 This week we were lucky enough to be joined by Fiona Burrell, from the Edinburgh New Town Cookery School, who spoke about cooking on a student budget. Since most of us are going to be heading off to university in the coming months, this was a fitting topic as we know a balanced diet is very important, not only for good physical health but also for alertness and concentration when studying.

English universities can charge up to a maximum of £9,250 a year for an undergraduate degree but tuition in Scotland is free. However, we learnt that when factoring in halls of residence, this can be quite expensive depending on which university you attend. For example, University College London charge around £8,073 per year for their halls. We were also given an overview of the breakdown when it came to the living costs for a student. For example, a year’s rent costs around £6,000 depending on the length of your lease, food costs amount to around £2600, household goods £400 and leisure activities around £1,500 – with many more aspects to take into account. Overall, the total cost for a student in Scotland per year is roughly £16,600 and it is therefore important to manage your finances well since many students have loans that can take many years to pay off and you don’t want to make this debt higher than it needs to be.

When it comes to food, we learnt that the amount of money you spend each week or month largely depends on your budget, although generally speaking £40 or less a week should suffice. It is important to take into account the costs of eating out. Eating out on Mondays and Tuesdays makes good use of student deals which can help to lower the amount you spend on food.

Some other useful tips we learned to reduce how much you spend on food included making your own meals or sandwiches for lunch, using a refillable water bottle rather than buying bottled water and trying not to buy cups of coffee - instead, make your own and use a flask. Also, try and cook together with your flatmates as it is cheaper to buy larger quantities of food at once, try to find and use cheaper supermarkets such as Lidl or Aldi, eke out hearty dishes such as spaghetti and chilli by adding beans or grains to make it last longer and make meals from leftovers – vegetables which are going soft are great for making soups, stir-fries and pasta dishes as well as making fish cakes from tuna tins and couscous and making smoothies with softened fruit and much more.

When buying food, we learned it was good to buy seasonally as this is cheaper and the food actually tastes better when it is in season, for example, fruit and vegetables. Also, buying own branded items such as butter, flour and pasta is cheaper. Often more expensive branded items have very similar ingredients, and you can avoid spending more money for the same quality of food. A good tip to find these products is to look on the lower shelves in the supermarket as branded items tend to be placed on rows at eye level.

We were told it is also a good idea to have a comprehensive dry stores cupboard with ingredients that have a long shelf life, for example, flour, rice, lentils, oats, dried noodles, couscous, stock cubes, spices, cereals and various tinned foods such as chopped tomatoes, beans and tuna.

To help maintain a balanced diet on a student budget, eating wholegrain products such as wholegrain rice, pasta and beans is much healthier for your body as they fill you up for longer and the body releases this energy slower. Finally, we were advised to try and avoid takeaways or ready meals! It can be easy to go straight for convenience as a student, but these foods rarely have meaningful nutritional value and it is really important to balance your eating.

Generally, student budgeting is very important, and we were given some suggestions of websites to look into to help get started either to plan in advance or to simply take a first look and get some more information, eg  https://www.which.co.uk/money/university-and-student-finance/student-budget-calculator  We were also told about budgeting apps which are popular among current students in the UK: Wally, Cleo, Money Dashboard, Pariti and Spending Tracker.

We are so grateful to Fiona for taking the time to speak to us this week. We learned a lot about how to cook at university efficiently and healthily and were given very useful general information on student budgeting which is a good grounding for what to expect in the coming year. We will definitely be utilising some of these skills!