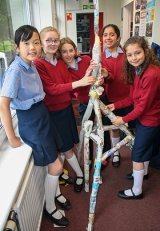 On Friday we were put into groups of four and set the challenge to build a tower using newspaper and tape. We were shown some ideas that we could use but we could also use our own ideas.

My group got started straight away. We decided we were going to roll up the newspaper to make four long tubes that we would join together to make a triangle shape. It proved to be harder than we thought. When we joined them together they weren’t stable so we had to think of a way to make it more stable. So made little tubes which we stuck horizontally between the vertical posts. We attached a lightning rod to the top so soon it was soon touching the ceiling. After tidying up we had to move the tower to a different room. The trouble was it was very fragile but we many to get it through the door to the other room for judging. 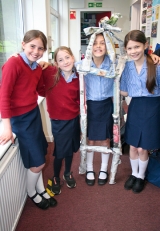 Our group had the tallest tower which could stand on its own! We all had a picture taken with our towers. It was hectic but a very good way to round off the week.