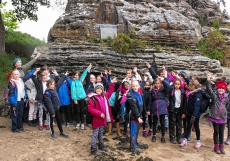 On Wednesday, the Primary 4s set off to research the history of the Romans in and around Dalmeny and Cramond.

We travelled by school minibus and had to wear a facemask. We walked downhill to the castle at Dalmeny in the rain. Eventually, we reached the beach at the edge of the Forth and we had our break. We played there and found a rock that had the date 1888 on it. We found lots of different shells. The first sign of the Romans that we came across was the Eagle Rock, where the Romans had carved an eagle into a rock. We made it to lunch at a playpark just as the sun was coming out.

After lunch, we followed the river Almond to Cramond where we found the place that the Ferryman found the Cramond Lioness in the mud. Our last discovery of the Romans was at Cramond Kirk where we found the remains of the Roman Fort and Bathhouse near the car park. At the end of our walk, we were lucky enough to enjoy an ice cream before returning to School.

I enjoyed all of it! Phoebe, Eloise, Katie, Dilara

I enjoyed discovering the Eagle Rock. Kana and Bess

I really enjoyed the ice cream at the end. Laila, Poppy L, Tilly, Katie and Eva

The remains of the Fort were interesting. Tali, Zandi and Anushka

I enjoyed walking along the beach and collecting the shells. Olivia and Isabela

I enjoyed seeing where the Lioness was. Poppy

I discovered a Roman grain store along the bank of the Almond. Jaanhavi

I loved walking along the River Almond and the waterfall. Emily

My favourite part of the day was finding out where the Roman Lioness had been found. Laurie

I enjoyed seeing Barnbougle Castle and the view around it. Fleur