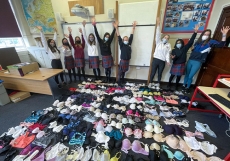 As a part of the Eco Group’s initiative focusing on fast fashion this year, the St George’s Eco Group, had a collection for the Scottish charity Smalls for All which collects and distributes underwear to underprivileged, deprived children and adults in Africa and the UK.

Underwear is a luxury – a privilege that, unfortunately, not everyone has – and one which we tend to take for granted. We often fail to see the vital importance of underwear. For example, having pants enables girls to go to school and complete their education without having to miss school every month due to their period. Having clean underwear can also be empowering, increase self-esteem and feelings of confidence.

In Africa, Smalls for All assists those living in orphanages, slums, IDP (internally displaced persons) camps as well as those in hospital suffering from medical conditions such as obstetric fistula. Smalls for All also meets requests for donations of underwear from charities striving to alleviate poverty and homelessness, in the UK, as whilst the need may be less the issue is just as real and important here as anywhere else.

In addition to unused packets of pants, Smalls for All also accepts donations of “gently worn” bras – which we were keen to advertise. As girls, we know how many abandoned bras we still have that are stuffed into the bottom of our drawers: bras that never *quite* fit right, we have grown out of or the pattern we have decided we hate. So, instead of letting all these unwanted bras waste away in the bottom of a drawer or simply throwing them away, to go to landfill, the St George’s Eco Group held a collection for Smalls for All where Upper School girls were able to drop off their donations to a drop-off box in the crush hall.

We are pleased to announce that, despite the disruptions this year due to the pandemic, we were able to hold a successful collection and, whilst the final numbers are still being finalised, we received donations of, approximately, 281 bras and 240 pairs of pants.

We are so proud of this total and this collection has been more successful than we could have ever imagined. We would also like to thank everybody – from staff, students, and parents – who brought in donations. Your efforts are greatly appreciated, and we know that they will be going to a very good cause! Plus, by donating your unwanted (but still perfectly useable!) bras you have helped reduce the waste going to landfill by recycling.