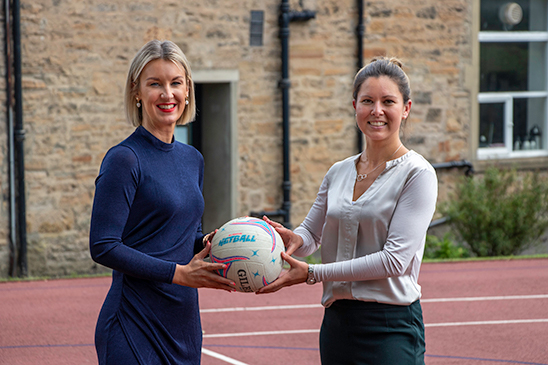 This exciting collaboration is a first of its kind for Netball Scotland and one that will see us work together with St George’s to increase community participation in netball and engage with more young people as we continue to promote the many benefits of sport to overall health and wellbeing.

St George’s have already played an instrumental role in the restart of netball in Edinburgh by opening their doors and the access to their fantastic outdoor netball facilities to some of the existing netball community. Joining forces with the highly regarded girls’ day and boarding school allows us the opportunity to further collaborate and open up more opportunities to engage with and inspire young people through the power of sport.

“I am immensely proud of this new partnership with St. George’s - a partnership which I hope will create a powerful model for how we grow and develop as a sport through young people, education and communities. This partnership reflects our commitment to using our platform and power as a sport to engage with, educate, empower and inspire the next generation of leaders, athletes, volunteers and game-changers who are needed to build a better, fairer and more equal world for all, in and outside of sport.”

"This partnership with Netball Scotland is an exciting step forward for St George's. We are delighted to have this chance to combine expertise and experience with such a dynamic governing body, to open up opportunities for access to netball for women and girls across Scotland. Together I am sure we can be significant change-makers in the game and in education. This is an inspiring and important new era for empowering girls through sport."

"It has been so rewarding working with Netball Scotland to help restart the sport on the back of the pandemic. We are passionate about opening our doors and creating and facilitating as many opportunities as possible for girls, women and the wider community to play, compete and enjoy the sport netball. With a very active programme already in place, we are very much looking forward to unlocking further opportunities under the 3 strands; Women & Girls, Education and Community."