Our guide took us downstairs to a dark room. In the room there were five tables, each table had a different activity. We all went to a table in little groups. Our first activity was looking at rocks and, on a smartboard, we had to match the rocks to a different place of a volcano. Then we did a volcano quiz on a laptop. The next table was a puzzle where you had to match the tectonic plates together in the right place and then place little volcanoes where the tectonic plates touched. My favourite table was where we had little cards and we had to identify the type of rock. Our last table was a game like Pictionary, and we had to draw volcanoes.

Afterwards we explored a room full of different rocks, for example sandstone, granite and marble. My favourite rock was one of the marble stones. While we were there, we also learnt about a man called James Hutton who discovered what the Earth was actually made of. 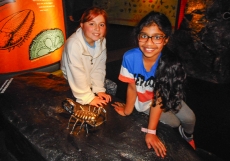 The next room had a big globe which went round in circles. At the side of the room there was a huge lift which they called a time machine. In the lift the walls were screens and there were lots of stars on them. When we got out of the lift, we entered a spaceship room which took us back in time and showed how everything was formed and how the Big Bang happened.

Next, we went into a really cool room which was like experiencing being near a volcano (but not as dangerous). There was a screen with a volcano on it and we watched it erupt while the floor was shaking vigorously, there was also a bit of smoke. If you didn’t hold onto the rail, you almost fell over! It was really fun!

After the volcano room we went to a room filled with statues of extinct animals. One of the statues showed what a man used to look like.

The next room was about fish and a yellow submarine. There was a machine with a quiz on it and it would tell you what fish you would be. I was a crab. Some others were Rabbit fish! That room was also attached to another room with a big iceberg in it. We put our hands on the iceberg and waited to see who could hold their hand on it for the longest. Sadly, I didn’t win. In the iceberg room we found a video of a baby polar bear which had just been born. It was really cute.

Our next activity was a 3D movie. While we waited the guide showed us some reindeer fur and we got to touch it. He also showed us a reindeer antler, but it was too fragile to touch. The movie was like we were in a plane, and we explored parts of the world and our pilot told us lots of facts about each place. We also went through a storm and crashed. When we crashed a rhino came to sniff us. We went to the artic and actual snow came down. Our last stop on the plane was the rainforest.

The next room was the rainforest with animals like boas, macaws, and a frog. We also met a chimp called Fred.

After lunch, our last activity was to watch a movie in the show dome. The movie we watched was called super volcano. Then we left to go to Arthurs Seat. 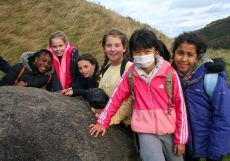 We left Dynamic Earth and we met our tour guide. His name was Angus. Angus was going to show us different types of rock on Arthurs Seat. First, we walked past the Parliament and Angus explained that most of the rock that the Parliament was made from was sandstone. We also had to try and spot the odd rock out. (The odd one out was granite). When we got to Arthurs Seat, Angus took out some sandstone and started hammering it. Lots of sand came off. Then he started hammering granite and nothing happened. He started explaining about how some rocks are harder than the other because they were made differently. We walked up the hill until we reached a little rock face and started talking about how these rocks had been chucked out a volcano. Then we went to this rock which was quite smooth and started sliding down it. After this, we said goodbye to Angus and headed back to school.