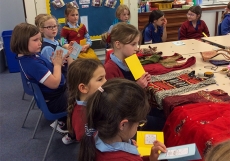 In Primary 4, we had a great week celebrating, Diwali, a Hindu festival. With Diwali and Bonfire night happening in the same week, we started off with an art activity, designing our own fireworks pictures. We used quilling as well as pop-up rotator mechanisms to create our fireworks. We decided to draw and cut out silhouettes of the Taj Mahal for the background. We learnt that the Taj Mahal was built by an emperor in memory of his wife.

On the day of Diwali, both P4 classes went outside in the morning to make colourful patterns called the ‘rangoli.’ Later in the afternoon, P4Y invited P4X to a surprise Diwali party! We lit diyas and had a display of Indian clothes, jewellery, accessories and small statues of Indian gods and goddesses. Some of the P4Y girls had prepared a play about the story of Rama and Sita to entertain the audience. So, we started off the party with the play! In the play, Imogen was Ravana and she fell on the floor and shouted, “Water!” It was very dramatic! 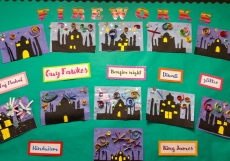 We watched videos about Diwali celebrations in India and in the UK. We tried some Indian dance steps too. Then, we all got Diwali cards with our names written in an Indian language called Hindi. We also tried stick-on bindis on our foreheads and wore bangles. Anaya, Lucy and Lydia tried on Indian clothes. They looked lovely! We got sweeties too! As we left the party, most of us rushed to find a mirror so we could see how our bindis looked.