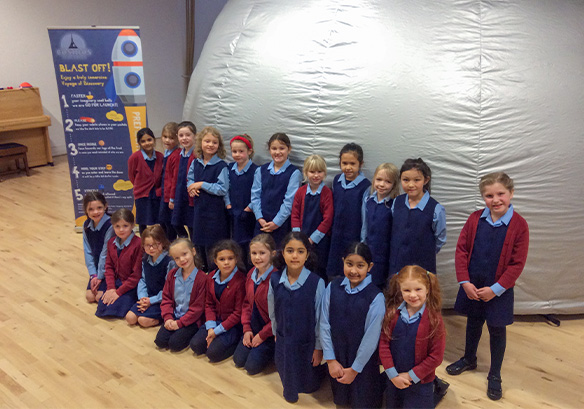 On Tuesday 22 November, the Primary 3 girls were extremely excited to find that the COSMOS Planetarium inflatable dome had touched down in the Junior School Hall! Under the command of their space captain, Steve, the girls were taken on a 3D journey into space. They went on a journey through space, past all of the planets that they have been learning about in our Solar System, the Milky Way.

They also went 50 years back in time and watched the first moon landing with Neil Armstrong and Buzz Aldrin. Then they took a trip to Mars to learn about the Roz the Robot that visited Mars last year!

They then flew over to the biggest planet in our Solar System, Jupiter, where they learned about the big red spot and discovered that it is a storm on Jupiter. They learned about different star constellations and discovered that the North Star always stays in the same position and they even got to see inside the spacecraft that took Tim Peak into Space! The planets, stars and galaxies spun all around us as we listened and learned all about Space. We loved our visit from the planetarium and have learned lots of new facts about Space!

Here are some of our favourite parts from the planetarium visit:

I learned that stars can make shapes in the sky such as the Great Bear. Clara

I learned about Neil Armstrong that he was the first man to land on the moon. Eliza

I learned that Neil Armstrong went to the moon with another person, Buzz Aldrin. Imogen

I learned that Neil Armstrong had a problem with the space rocket and couldn’t land where he really wanted to. Gigi

I liked learning about Neil Armstrong and the landing on the moon mission. Rebecca

I loved all of it because everything was interesting. Maryam

I really enjoyed when we learned about the first people to land on the moon. Rose

I liked learning about the stars. Zara

It was really inspiring. Alice

I liked when he told us about the first three people who went on the moon. Lucy

I liked it when we learned about the star constellations like the bear. Amelie

I loved it when we saw the pictures of the planets and the stars. Iona

I liked when we learned about the astronauts who first went the moon. Amaya