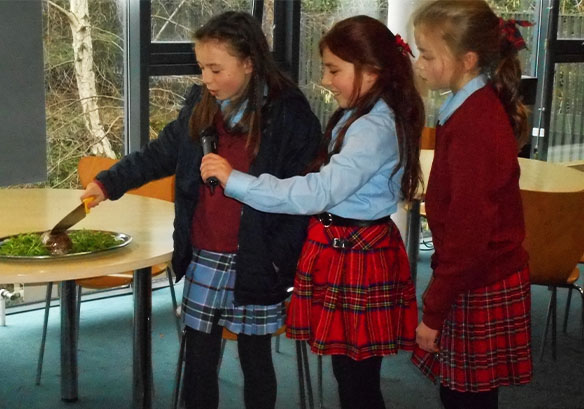 "Last Friday we had a Burns Lunch - haggis, neeps, and tatties. The haggis was piped in by Mr Hannay from Upper School and carried by Phil, one of the chefs. He held the haggis high above his head! The bagpipes were very loud! The address to the haggis was performed by three students, Megan, Olivia and Freida. When Freida tried to cut the haggis, she couldn’t, because it still had the clingfilm on it! Ava also said the Selkirk Grace. Eve said a thank you to the cooks and the piper.

"After lunch, we went to the Lower School Hall and listened to some people performing traditional Scottish songs, poems, and music such as Scots Wha Hae and a Red Red Rose. Isla M played beautifully on the piano and Isla K did a Highland Fling. Charlotte played a tune on her flute. Afterwards, Oonagh and seven of her friends performed a traditional Highland Dance. Each P6 class then performed a Scottish song they had been practising. P6Q sang my Heart is in the Highlands, P6P, Scots Wha Hae, P6X, The Deil’s Awa’ Wi’ the Exciseman. To finish the Burns Lunch off, we had a ceilidh and Mrs Morrison called the dances. We partnered up and she taught us how to do Strip the Willow and The Canadian Barn Dance. It was an awesome afternoon, and we all had such fun!"