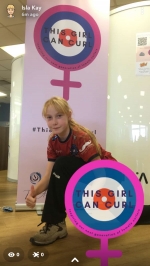 Isla (P6P) had the chance to meet her curling heroes, the 2021 World Mixed Doubles Curling Champions, Jennifer Dodds and Bruce Mouat, prior to their departure for the Beijing 2022 Winter Olympics.
She said of the encounter: “Jennifer and Bruce were kind enough to share some hints and tips during the coaching session and, despite missing out in their Bronze medal match at the Beijing Olympics, they are back in action hoping to do better in the women and men team events. I really hope they both do well”.
Isla has been curling for 3 years at Curl Edinburgh and regularly competes for the Murrayfield-based rink in the Scottish under-14s national slams, as well as under-12s quadrangle games against Stirling, Kinross and Perth.
On Monday 7th February 2022, Isla also had the chance to appear on the BBC’s Breakfast Show with her teammates, when the Gogar Park Young Curlers were on hand to help demonstrate throwing the stones and sweeping with the brushes. It was an early morning!
She commented: “The club is trying to make the most of the Olympics season by trying to attract more new junior curlers to the sport. If anyone would like to give it a try, they can contact me and I would love to help you. Some Edinburgh schools have curling teams and, who knows, we could maybe put a St George’s School team together one day!”
Isla also supports Scottish Curling’s ‘This Girl Can Curl’ initiative and campaigns to get more girls into the sport, although she says everyone is welcome. Well done Isla ! #YesSheCan
Share this:
BACK TO NEWS
News Archive
2022