Primary 6 got an Author Visit by Elle McNicoll on the 7th of February to hear about her new book, Like a Charm. All our year group learned a lot about Elle and how she grew up with autism and dyspraxia. 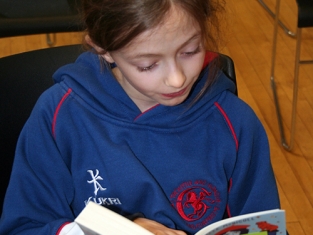 We learnt that there is nothing wrong with being neuro-divergent, but Elle told us that she was always being put down by all her teachers who said her handwriting was messy and she needed special help. We also learnt about how many publishers she went to with her books, but they all said that writing books about neurodiversity is silly and will not sell. She was convinced to go to one last publisher. Elle felt very nervous when she was getting ready for her meeting with the publisher. When she got there, she had a big rant about how all the other publishers had turned her down and said her idea was silly. Elle told us that when she had finished her rant, the publisher agreed with her on everything she had said. Elle was surprised with the publisher's response, but they managed to publish her first book, A Kind of Spark.

In the days leading up to the release Elle was having lots of negative thoughts about the book but when it was released the queues around the bookshops were huge! Elle sold thousands of books that day. Elle won a Blue Peter award for her book A Kind of Spark. So far Elle has written three books; A Kind of Spark, Show Us Who You Are and Like a Charm.