Fifteen girls from Primary 6 were introduced to the sport of curling on Saturday 26 March, on the occasion of Isla's birthday celebrations. Taking place at Curl Edinburgh, four coaches from Gogar Park Young Curlers (GPYC) took the girls through the basics of the game, including strategy and sweeping, through a series of games (or 'ends' as they are called). The session finished off with the girls perfecting their sliding technique on the ice, one of the most tricky aspects involving both core strength and balance. Everyone thoroughly enjoyed themselves and were ready for their lunch and cakes afterwards!

The event came on the back of Isla's continuing progress in the sport, having secured successes in the Mhairi McAughtrie Trophy which is held every year at the Stirling Curling Academy. The yearly event is specifically for under-12s and is held in memory of a long-serving curling coach. The boys and girls from GPYC beat a number of teams to finish in first place and Isla also won a prize for the best shot of the competition, a well-timed drawing shot around wide 'guards' (which are blocking stones).

The next weekend saw Isla compete in the Perth Fun Spiel organised by Scottish Curling. For the first time, Isla formed part of a mixed-rink team of four in the under-13 category, including girls from Kinross and Forfar. The team was triumphant and went on unbeaten all day to clinch the under-13 trophy after overcoming Hamilton in the final.

You can also watch more about Curling and see Isla in action in this BBC Newsround programme, 8 April: https://bbc.in/3vv2dZa 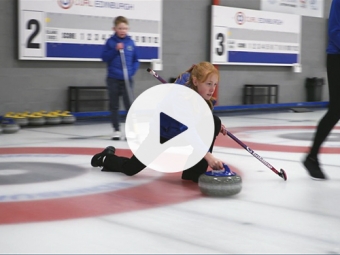