Some pictures and comments from the girls about their experiences at P6 Camp. 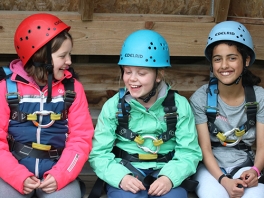 "Today I went to school full of excitement. We put our luggage into the back of the bus and then we were off to Lendrick Muir. When we got there, we were put into activity groups, and I was in orange. After that, we went up to our dorms to put our luggage away. I was in a dorm with Katie, Emilia, Isla M, Vina and Eva. Then we had lunch and then I did my first activity which was raft building. We had to tie logs together with rope to make a structure and then put that on top of barrels. It was very fun, but I fell in twice and got numb from the waist down. After that I had a hot shower and had dinner which was burgers then finally, I went to bed."

"When we got to school, we had to put all of our suitcases in the Hut next to the MUGA. We all stood there in the rain and then sang happy birthday to Elizabeth. At 9:30 we got on the coach, and I sat next to Katie. It was about an hour-long journey. When we finally arrived, we had to go to the meeting room and put our luggage down. Then we all sat down on the floor, and we talked about the rules. Afterwards, we found out which activity groups we were in. I was in turquoise with Emilie, Teme, Aarna, Diya, Lanre and Megan. Then we found out who was in our dorms. I was in a dorm with Jessica, Katie, Isla M, Eva and Vina. Then they told us what our first activity was, I had raft building. When we were ready, we went to meet by our coloured cones, then we went to put the waterproofs on. It was raining when we were building our rafts but when we finished, we got on and played a few games. At the end we had to get in the freezing water to push the raft in. We all screamed! After dinner, we did a murder mystery and the maid had murdered Lord Mowbray. It was really funny because Mr Fowles was pretending to be Lady Mowbray! Then we went to our dorms, but we didn't go to sleep for ages. Even I was chatting, and we made Katie laugh a lot." 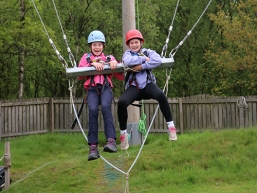 "I had refreshed myself after a nice sleep and was ready for the day. First I had breakfast and then I went for my first activity which was the king swing! The king swing was fun but scary. I went on the king swing with Charlotte. We were attached to a big metal bar with a harness. Then the people who were not on the king swing would pull a rope to pull us up. Then when we got to the height we wanted to be at, we pulled a cord and we swung high. After the king swing, we did bungee trampoline jumping. We were attached to two long ropes that were attached to the harness and we would jump up and down and we would go really high. I did a backflip which was really fun to do. Then I had lunch which was a roll, crisps, fruit and some chocolate. My next activity was mini survival where we had to make a small den for a stick man so he could stay warm. My last activity was tree climbing! We had a harness on and we were on a rope to climb up the tree until we couldn't go up any higher and then we would fall slowly back down. In the evening, we had a campfire while we roasted marshmallows and sang songs."

"When we broke up it was 6:30 am so we had two hours until breakfast then we went to the lounge and there were already a few people there. After breakfast, my first activity was tree climbing and if we made it to the top  we had to squeak the yellow dinosaur. I made it to the top! Our next activity was the King Swing and it was really fun!! I went on it with Teme. Next, we had bungee trampolining it was so fun! Our final activity was mini survival. We had to make a shelter for pine cone people to see if they got wet. After free time, we had dinner and then we played some ball games and had a campfire. At the campfire, we had marshmallows and sang some silly songs." 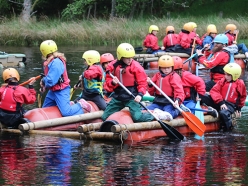 "Today was the last day and we did group activities in our groups. Then we had lunch and  it was time to go. Before we left, we watched a little video about our time at camp and then we left on the bus. I really enjoyed my camp, and I would gladly go again."